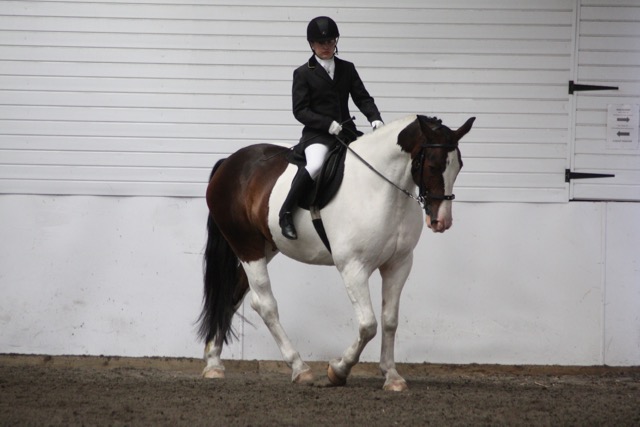 Hello everyone, thanks for logging in to my page where you can find out all about me. I am an Irish horse and I was born in 2007 in Ireland (hence being Irish). I was backed for riding when I was 4 years old and I arrived in England in August 2012. I had been here about 3 weeks when Sally W and Isobel from Barrow Farm came to see me. Isobel was looking for a horse that would come to Barrow Farm to be a working livery. They appeared to think I was quite good looking with my bay head. 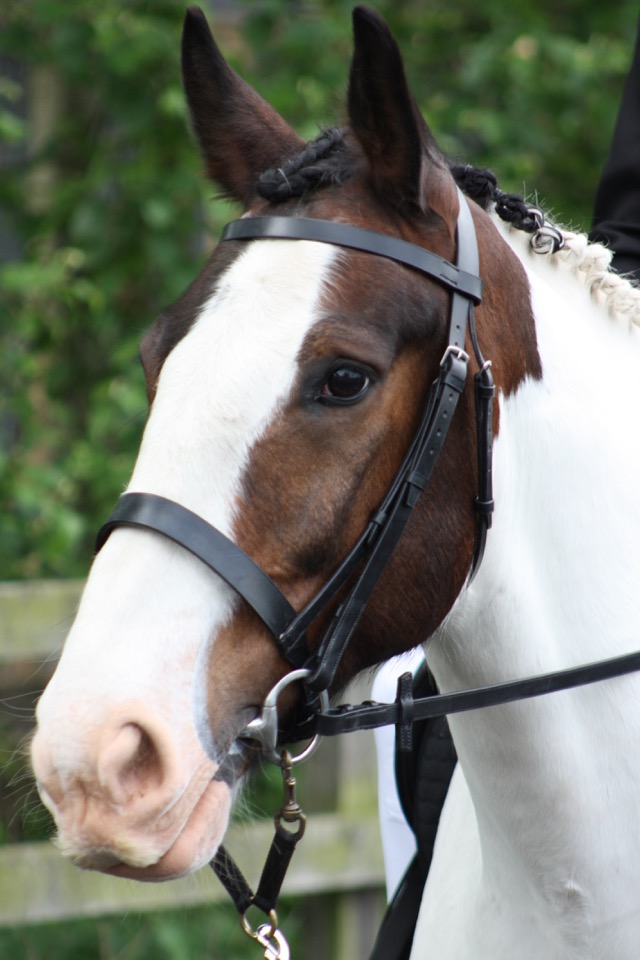 However, they both looked a bit shocked when my rug was taken off and I am nearly all white except for a bay bottom! They both had a ride on me and then Isobel took me for a short hack. I think I impressed them as two days later the vet came to check me out and two days after that I arrived at Barrow Farm. 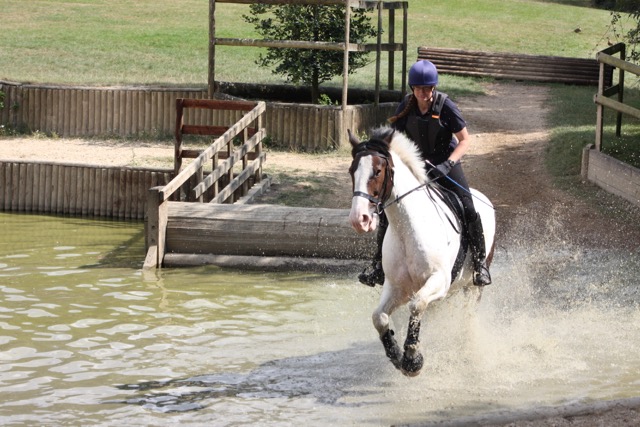 I love it here. I soon started to go out in the big field with Louie, Fergus, Jet, Nicco and Owly. We love to have a good play and I am never sure why Isobel looks so upset when I come in with my rugs ripped – we were only having fun.

As I was still quite young and very inexperienced when I arrived, to start with I just had to get used to Barrow Farm. I had never been in a riding school before and the music was very, very scary but I soon got used to it. Isobel, Sally W, Clare and Livvy  spent time getting me used to the props and having side walkers to make sure that I was not phased by anything when I started doing my RDA work. I did my first RDA lesson at the beginning of June 2013. It is all great fun, but I am not sure why none of the props are edible. I keep trying to eat them but they just laugh at me.Gradually over the next year I increased the amount of RDA rides I did. I have become a regular fixture at events such as the Carol Service and Open Day. At the Carol Service I always carry one of the Three Kings. 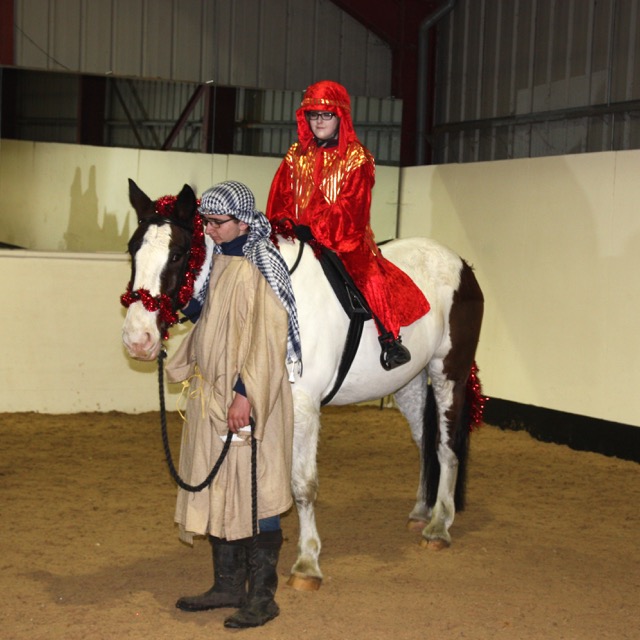 It turns out I am good at all sorts of things. I have had a go at dressage including winning a first rosette at my first ever RDA/Intro to Para competition and also as an off-lead horse. I was the tallest RDA horse until Louie started having a go but you still cannot be scared of heights if you want to ride me. In the photo below you can see me working off-lead with Howard as he practiced for his Level 2 showjumping. 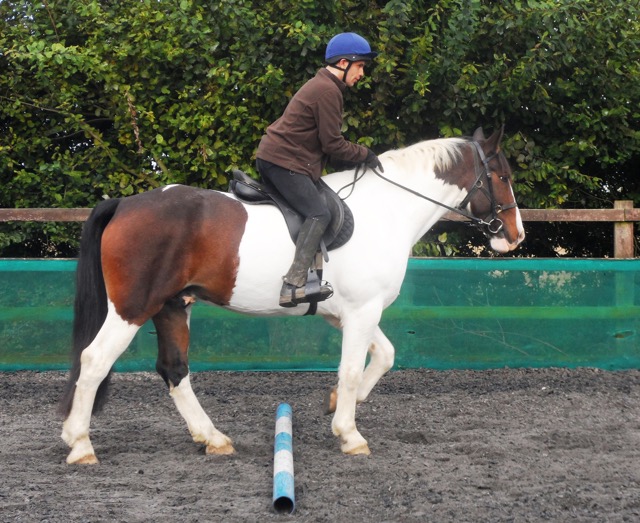 If you would like to adopt me, please go to the Adopt a Pony page.

Well 2016 was a busy year for me. Isobel started off taking me to a competition called Trec. This indoor version involves completing lots of obstacles such as bending poles, walking under low branches and steering around an assortment of other obstacles. She said it was to get me ready for the Countryside Challenge RDA competition. Well it wasn’t as hard as it looked and we brought home several rosettes. You can see us steering around an obstacle called the shamrock in the photo below. 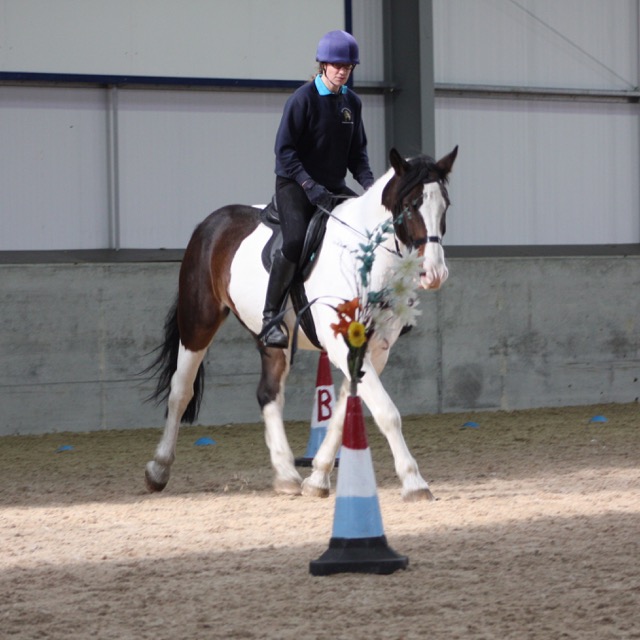 Then in May I went to the RDA regional competition held at Oaklands College near St Albans. Well Isobel and the Barrow Farm team were a little nervous as it was my first time but I don’t think I put a foot wrong (what is wrong with eating a bit of grass in the Countryside Challenge – it is supposed to be a walk in the country after all). There is no grass in the dressage arena so I was not distracted and I did extra well and qualified for the National Championships with both Lucy and Claire. Here is a photo of myself and Lucy getting some last minute tips from Sally our coach. 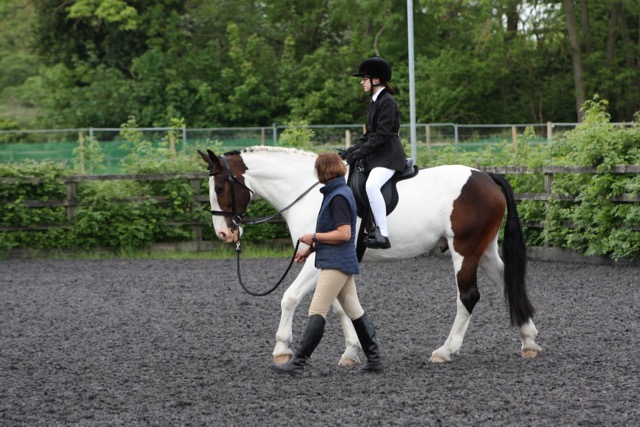 Now one of the stranger things that I have done is spent an hour in the riding school with Sally, Clare and Isobel having to ride round and round whilst they played lots of different music. Well apparently I suit jazz and they ended up picking two Herb Albert & Tijuana Brass tracks – The Lonely Bull and A Taste of Honey (I have a different rhythm in walk and trot). This was for Lucy to do her freestyle dressage test too. Claire had already chosen Hey Big Spender as her freestyle music.

So off I went on my longest trip since I arrived from Ireland, all the way to Gloucestershire to the RDA National Championships. On the Friday I competed with Lucy, you can see us here in the freestyle test. I know it’s that one because my first test was the PVI Championship Dressage test and Isobel was so worried I might be overwhelmed by the big stage that she had to come in the arena to watch and couldn’t take any photos. Any way as you can imagine I was perfectly behaved so in the freestyle test she was brave enough to take some photos from the gallery. 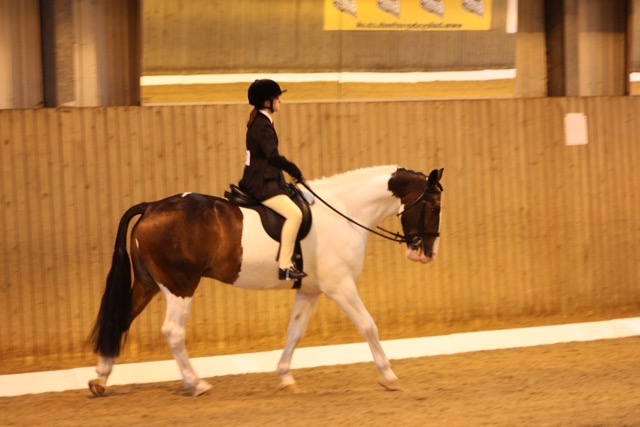 I behaved so well that I actually won both my classes with Lucy. It was all rather exciting as we had to stay overnight – I had a stable next door to Lula who was also competing. You can see Lucy and me with our rosettes outside the stable below. 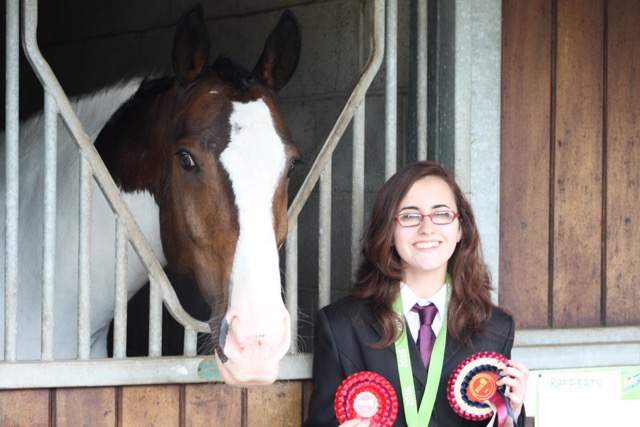 On the Saturday I competed with Claire. I was still very well behaved in an even bigger arena with lots of people watching and Claire and I came 5th in the Grade I Championship Test and won the Grade I Freestyle test, which meant that we won a very big cup. 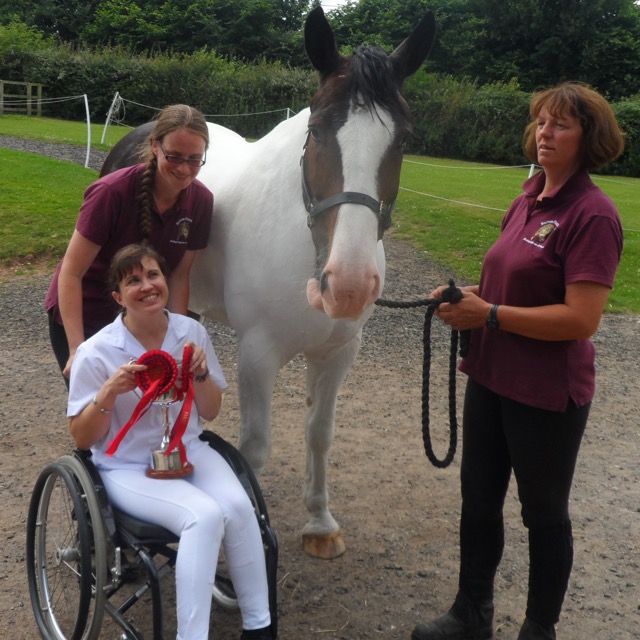 When I have not been busy on the ten rides I do a week, Isobel has taken me out to have some fun and done some dressage competitions herself and also a little bit of cross-country schooling. It is my turn to go as the older support horse to help the new ones, Jaybee and Boycie. All these activities help to keep me fit and well trained so that I can do an excellent job with my RDA riders. 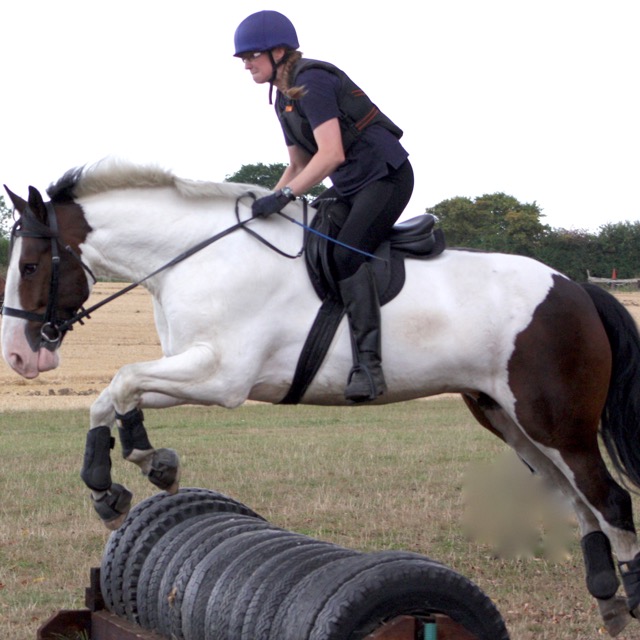 Below you will find a video showing you all the fun I had at the RDA National Championships in 2016.

This is some of what I got up to during lockdown.